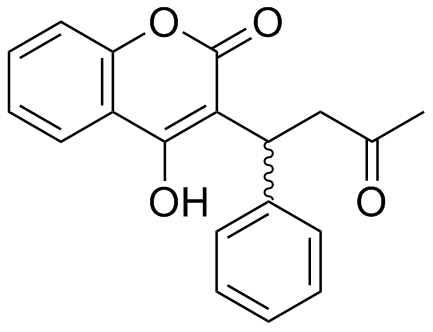 Warfarin, Coumadin is an anticoagulant used to prevent and treat blood clots (especially deep vein thrombosis – DVT or pulmonary embolism – PE). Preventing formation of blood clots helps to reduce the risk of a stroke or heart attack. The active ingredient is warfarinum natricum. You can  come   across   other brand names such as Coumadin, Marevan, Jantoven, Lawarin and Uniwarfin.

There are several condition that may increase your risk of developing blood clots:

Warfarin is an anticoagulant, often called as a “blood thinner”. By decreasing the amount of certain substances (clotting proteins), Warfarin helps to keep blood flowing smoothly in your veins.

Side effects of Warfarin, Coumadin

Warfarin can cause serious even possibly fatal bleeding. This can happen especially when you just started taking this medication, if you take too much of warfarin or together with some other medicines that increase the effect of   Warfarin.  If you are taking warfarin then you should be aware that certain medications, natural supplements and foods can affect the levels of warfarin in the blood and can cause serious complications.

Your doctor will monitor closely your lab results (INR test) to decrease your risk of bleeding.

Warfarin has a “narrow therapeutic range.” This means that any change in the amount of warfarin in the blood may change the way warfarin works for you. For example, too much warfarin can cause excessive bleeding, while too little could affect the ability of the drug to prevent the formation of clots, and this could lead to serious health consequences such as heart attack or stroke.

Some drugs (both with prescription and without), natural health products (for example, herbal remedies, vitamins, and supplements), and even  certain foods, are known or suspected to interact with the warfarin in a manner that changes the level of drug in the blood. For this reason, people who take warfarin should be very cautious when considering the use of these products. 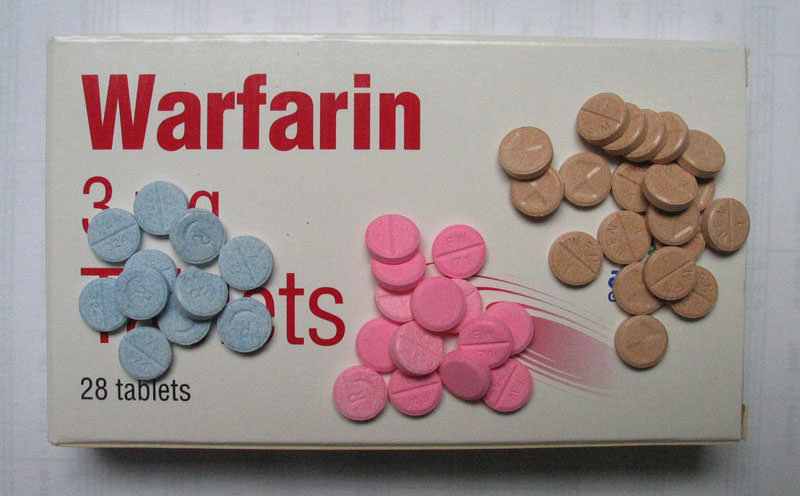 How does Warfarin work?

Warfarin belongs to a group of oral anticoagulants. It acts as an antagonist of vitamin K, thereby prolongs the process of blood clotting. It  is presented   in various packages and color-coded tablets according to the content of milligrams – 5 mg pink, blue 3mg and beige 1 mg. But never rely only on color, but always check the information on the packaging of the drug!

Warfarin is absorbed from the stomach immediately, however, for the full onset of action it takes about 3-5 days after the  first dose. The effect of warfarin last about the same time after discontinuation.

Other possible side effects include  nausea, vomiting, diarrhoea, abdominal cramps, fever. It can also lead to more or less bleeding or bruising.

Many prescription and OTC medications are known to interact with warfarin. Examples of such drugs from various classes include, but are not totally limited to the following:

Your doctor or pharmacist should advise you of the drug interactions. The desired level of warfarin in your blood is influenced by food supplements, illness or certain foods. More about food, which to avoid and what is the warfarin diet.

How to minimize the risks of Warfarin, Coumadin?

When to seek medical help?

If one of the following symptoms occur, you must contact your doctor immediately:

Warfarin, Coumadin should not be used in pregnancy because it has adverse effects on fetal development (see warfarin embryopathy). During pregnancy warfarin is used only in exceptional situations. Your doctor will consider whether the benefits outweigh the risks. Otherwise, low molecular weight injection is used instead of warfarin when women are planning to get pregnant and during whole pregnancy.

Thrombophiliac.com is not liable or responsible for any advice, course of treatment, diagnosis or any other information, services or product you obtain through this site.

IF YOU BELIEVE YOU HAVE A MEDICAL EMERGENCY, YOU SHOULD IMMEDIATELY CALL AN AMBULANCE OR YOUR PHYSICIAN.

If you believe you have any other health problem, or if you have any questions regarding your health, promptly consult your physician or other healthcare provider. Never disregard medical or professional advice, or delay seeking it, because of something you read on this site or a linked website. Never rely on information on this website in place of seeking professional medical advice.